Permanent Collection: The Celebration of the Mass, ca. 1930-35 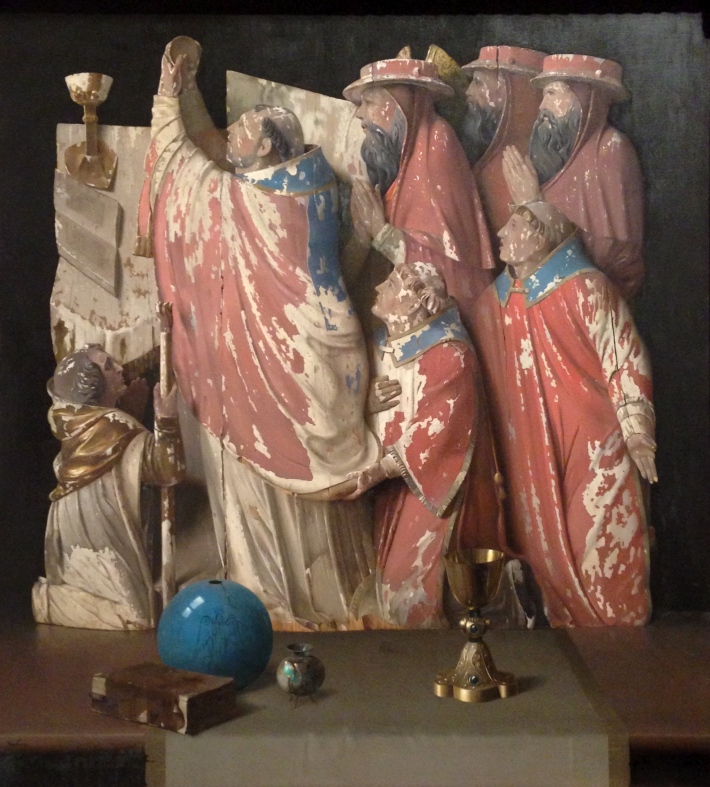 Harry Willson Watrous, The Celebration of the Mass, ca. 1930-35, oil on canvas, Metropolitan Museum of Art

“In his seminar on the gaze Lacan retells the classical tale of the trompe-l’oeil contest between Zeuxis and Parrhasios. Zeuxis paints grapes in a way that lures birds, but Parrhasios paints a veil in a way that deceives Zeuxis, who asks to see what lies behind the veil and concedes the contest in embarrassment. For Lacan the story concerns the difference between the imaginary captures of lured animal and deceived human. Verisimilitude may have little to do with either capture: what looks like grapes to one species may not to another; the important thing is the appropriate sign for each. More significant here, the animal is lured in relation to the surface, whereas the human is deceived in relation to what lies behind. And behind the picture, for Lacan, is the gaze, the object, the real, with which ‘the painter as creator… sets up a dialogue’ (112-13). Thus a perfect illusion is not possible, and, even if it were possible it would not answer the question of the real, which always remains, behind and beyond, to lure us. This is so because the real cannot be represented; indeed, it is defined as such, as the negative of the symbolic, a missed encounter, a lost object (the little bit of the subject lost to the subject, the objet a). ‘This other thing [behind the picture and beyond the pleasure principle] is the petit a, around which there revolves a combat of which trompe l’oeil is the soul’ (112).”

In the American Wing of the Metropolitan Museum of Art is a room with a number of trompe l’oeil paintings. “Old Souvenirs” (ca. 1881 – 1901) and “Office Board” (1885) by John F. Peto, and “Still Life—Violin and Music“ (1888) by William Michael Harnett are probably the most well-known. Jasper Johns’ engagement with Peto’s “The Cup We All Race 4” had first gotten me interested in Peto, whose trompe l’oeil paintings are noteworthy (if not entirely unique) in their depiction of flat, worn subjects, like cork boards littered with chewed bits of paper, envelopes and photographs. But it isn’t Peto’s work that commands my attention now, as I think about trompe l’oeil through Hal Foster and Foster’s Lacan. With its polychrome wood relief sculpture dominating the scene, it’s Willson Watrous’ “The Celebration of the Mass” that feels like a genuine “trick of the eye.”

In the story of Zeuxis and Parrhasios, Parrhasios wins the contest, first, because he confronts a basic condition of painting—namely, the flatness of the support—and uses that to his advantage, depicting a flat subject (or at least a relatively shallow one, depending on how one imagines the veil) that largely conforms to the real space of the stretched canvas. More importantly, Parrhasios trumps Zeuxis because, in his painting, the illusionism pivots from the picture plane to the realm of signs. Whereas Zeuxis paints a beautifully illusionistic bunch of grapes (I imagine them: lustrous, full, with one or two peeled grapes glistening in the foreground)—mastering pictorial space, light and shadow, surface and depth—his painting can only go so far towards the object, and there will always be a gap in the image between the representamen and the thing denoted. Parrhasios, on the other hand, chooses not to represent things but to represent signs. His painting is not of the veil so much as what the veil represents: the simultaneous deferral and promise of exhibition, presentation, revelation (literally, un-veiling). In representing a sign, Parrhasios is able to close the illusionistic gap in representation. (Think of Parrhasios, then, as the Jasper Johns of Ancient Greece?)

This is why, while on a superficial level, Peto’s paintings seem closer to Parrhasios’ trompe-l’oeil, because they constrain their illusionism to radically shallow subjects (essentially mapping or “rolling out” a shallow picture plane onto a flat support), it’s really Willson Watrous’ Celebration of the Mass that strikes me as the more successful trompe l’oeil, insofar as it represents a representation. For me, things get interesting when we begin to consider the surface of the polychrome wood relief sculpture depicted in the painting: this peeling, flaking, faded paint—what is it but paint? Where is the illusion? As with Parrhasios’ veil, the ‘trick of the eye’ that in fact deceives desire is one effected through a certain lack of sophistication, through the absence of illusionism at certain point in an otherwise illusionistic space: a point where sign touches sign, and we feel we could almost perceive the real, as if through a veil.