Sometimes, and it’s not always clear why, you get an itch to see a particular work of art or the work of a particular artist.  This happened to me about a month ago: I had to see some Albert Pinkham Ryder.

The Metropolitan Museum had two Ryders on display.  (Full-on, proper display, that is: another five or so works could be seen in visible storage.)  The two small, square works were hung one above the other.  Moonlight Marine was, if memory serves, the bottom painting, closer to eye level.  It depicts two boats, just curved triangular sails, vectors, heading right to left on a dark Prussian blue sea.  The sky, quite-bright and bone-colored, is striped by backlit clouds of as dark a blue as the water. 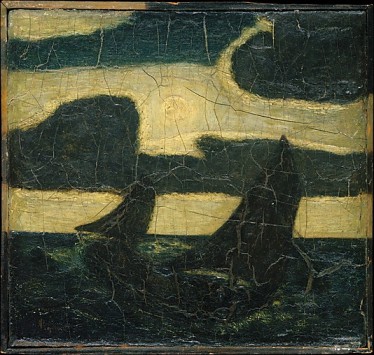 The compositional movement of Moonlight Marine is largely side-to-side and up-down: the striated sky and horizontal directionality of the boats is balanced by the verticality of the sails.  It has, then, a calmer feel than the top painting, The Toilers of The Sea, which likewise depicts a nighttime nautical scene.  Here, though, Ryder has painted a single ship.  It crashes through the sea, heading away from the viewer, toward the horizon and the moon, creating a strong, dramatic diagonal thrust.  There is also a fuller range of value, with more intermediary tones, though the palette of this painting, like the one below it, is almost exclusively based on a palette that opposes Prussian blue and Naples yellow. (Though here I ought to echo the caveat offered by the wall text: Ryder’s paintings are notoriously unstable, as can be seen from the cracked surfaces on these works and even more dramatically from some of the ones in visible storage.  The hues and tones that we see are likely not as they were when Ryder painted them.  Still, I am discussing what I saw.) 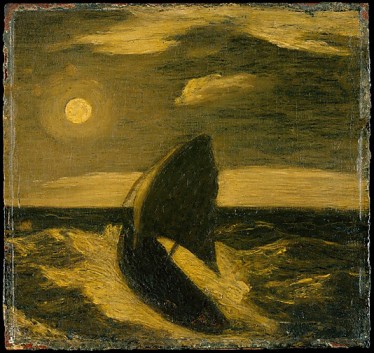 What is perhaps most remarkable about the relatively tranquil Moonlight Marine and the more active Toilers of the Sea is the sense of mystery that each painting exudes.  Either one could plausibly be an illustration for a story by Poe or Stevenson– something Gothic, full of danger.  And, really, a landlubber like myself has to ask, is sailing a boat at night all that common?  Something exciting must be happening.

But this air of mystery, which seems so clearly an effect of theme, of subject matter, is best conveyed by the works’ form.  In particular, I’d argue, it’s Ryder’s use of tone (of color-value) to create weird, unexpected shapes that makes the works so elusive and beguiling.  In Moonlight Marine, the triangular sails disappear in and, in spots, begin to merge with the surrounding sea and clouds.  The boundedness of the known thing threatens to dissolve into amorphous, flowing obscurity.  In Toilers, the boat’s slipper-shaped keel angles up and to the left, where it meets with the in-curving sail, which in turn pulls back in the opposite direction.  What is still very clearly a boat becomes, at the same time, an odd compound shape, the arrow-like resolution of two bulging, propulsive masses of dark.  The familiar becomes strange and highly specific.  Or, to put it another way, Albert Pinkham Ryder was a very sophisticated abstract painter.

This, probably, is not news to anyone familiar with his work.  In fact, before leaving The Met that day, I had seen proof that I was hardly Ryder’s only admirer.  Hanging in the modern wing were four or five Marsden Hartley paintings.  I noticed the one on the far left, closest to the corner, first.  It was a desert scene.  I liked the way he had lined up hill after hill, stacking one on top of another, right in the middle of the composition.  It was unexpected and improbable and emphasized the abstraction of the landscape.  I briefly thought of the Ryders I had just admired before continuing to look at the rest of the wall.  Understand, then, and please indulge the satisfaction I felt when, seeing the lone portrait of the group, I went in for a closer look: it was Hartley’s portrait of Albert Pinkham Ryder.

Dutifully noted: at the moment, I can’t access the images I took during my visit to The Met.  The above images were taken from the Met’s website, www.metmuseum.org.  The caption information is as follows:

The Toilers of the Sea