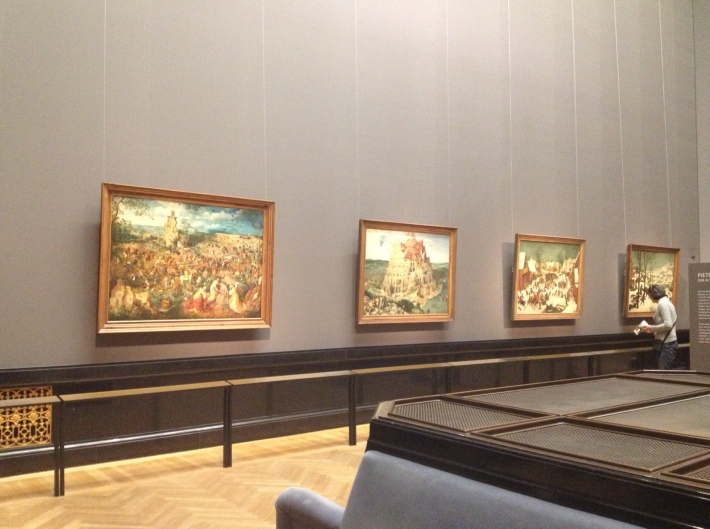 Some dozen of the extant Pieter Bruegel the Elder paintings, a clear plurality, belong to the Vienna Kunsthistorisches1. As an earlier post related, MPW’s visit to the institution coincided with an Ed Ruscha-curated exhibition, for which Ruscha had cherry-picked two Bruegel paintings, Children’s Games and Fight Between Carnival and Lent. The rest hung together in a single gallery. The Conversion of St. Paul, The Procession to Calvary, Tower of Babel, The Slaughter of the Innocents (which I recall the wall text as ultimately and somewhat reluctantly attributing to Pieter the Younger), and Hunters in the Snow lined the longest unbroken wall, left to right; on the opposite wall were The Peasant Dance, The Peasant Wedding, and The Peasant and the Nest Robber; on one of the short end walls, Gloomy Day and Return of the Herd, with, I think, the small Suicide of Saul in the corner. We look at the scenes in most of these works— excepting, maybe tellingly, only the peasant paintings— from the oddly elevated eye-level, characteristic of Bruegel’s work generally, which I’ve long puzzled over. Is the landscape of Flanders especially hilly, commonly affording such views? To equate “up,” pictorially, with distance is natural. That is how we, as upright beings, see. But Bruegel exaggerates this equation (which is also to say, he abstracts it.) To whom does such a perspective belong? It’s not quite the personalized, grounded and rational point-of-view that ought to mark art of the Northern Renaissance; it seems a holdover from earlier conceptions of space and, perhaps because his paintings share this trait with those of Hieronymous Bosch, visionary, too (though Bruegel does go further in attempting to account for and at least somewhat naturalize these viewpoints through the topography he creates.)

Seeing a— the— room full of Bruegels, I was struck by a further and more particular formal sameness, evident in many, though not all of the works: the curving, centripetal movement. Still more specific: the composition of each the first three paintings on that long wall, Conversion, Procession, and Tower, swirls around a peak, a central prominence. Like the elevated point of view, this recurrent feature prompts questions. Is the strong and outstanding center merely a convenient balance to that centripetal movement? Perhaps— even likely— but it’s absent in other works, including all of the “Seasons” paintings, that are also organized around this same movement2. Does it mean something? Sure, in some cases, at least: e.g., the height of the Tower of Babel equals the pride of Nimrod. But— if a tower can as easily be a mountain or a windmill, can we conjecture that the true import, if any, might reside in the form rather than the subject matter? Or, maybe underlying all these questions and perhaps most compelling: how does one become interested in a formal arrangement? And, when repeated, returned to (like a place), it becomes stronger than “an interest”: it’s an attachment, a connection. 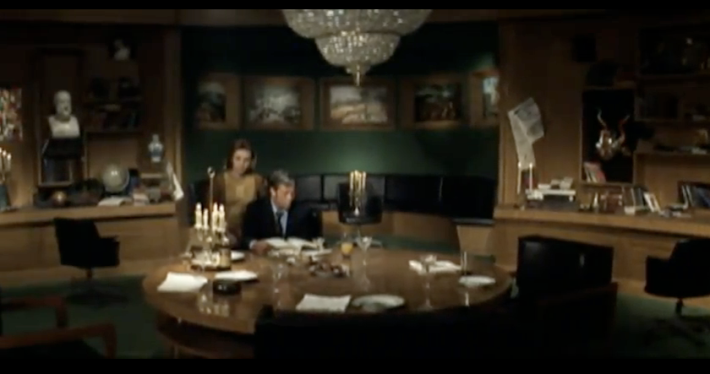 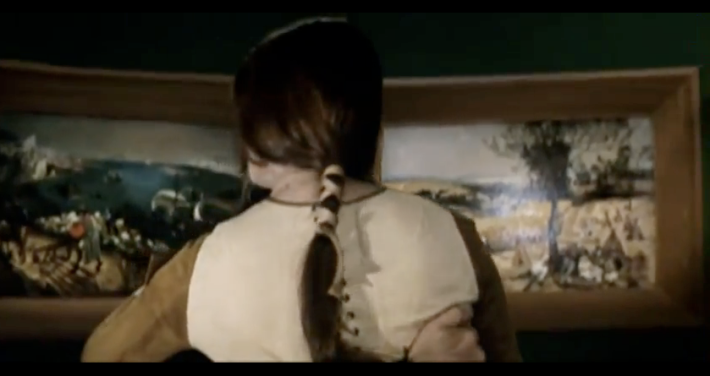 In Andrei Tarkovsky’s Solaris, five prints of Bruegel paintings hang in a curved room on a space station (Hunters in the Snow receives particular attention). Tarkovsky, like Bruegel (or any artist whose work is recognizable), favors certain formal strategies: the slowly curious camera that pans to reveal a new scene; the subtle, inch-by-inch zoom. For me, though, quintessential Tarkovsky is defined more by subject matter. It’s riparian: moving water, spirals of submerged grass, tumbled pebbles and overhanging sedge; at the bottom of a nearby pool, some inevitable castoffs: the stem of a wine glass, a few coins.

The English title of Tarkovsky’s book about his films is Sculpting In Time. He writes of the “flow of time” and, explaining “rhythmic design,” designates the various “time-pressures” metaphorically as “brook, spate, river, waterfall, ocean.”

Moving water, it seems, does have special significance for Tarkovsky. Throughout his films, more generally, nature takes dominion everywhere3: weeds erupt between the railroad ties in the Zone; streams and fig trees in the husk of a building where the poet Gortchakov gets drunk and tells the ragazza his joke about the man who was rescued from the pond in which he happened to live.4 In his book Zona, Geoff Dyer discusses Tarkovsky’s post-Romantic view of nature (he calls some lines of Wordsworth “proto-Tarkovsky”): “It is when there is some kind of human interaction with landscape, when the landscape, having been manufactured or altered, is in the process of being reclaimed by nature— a source of abiding fascination for Tarkovsky— that its ‘inward meaning’ is most powerfully felt.”

In graduate school, I heard a professor, Martha Macleish, describe the inverse relationship between Bruegel’s Tower of Babel and the pit dug for the casting of the bell in Andrei Rublev. Extending a pit in space creates a channel. A trickle of water enters the channel. We follow the trickle down and around. We look up; our eyes re-focus to take in the surrounding landscape. We see how the channel sweeps left, away, before, more distantly, veering back. We notice people, here and there. We raise our gaze even higher as we look further out . . .

1Wikipedia tells us that forty-five “authenticated” paintings survive, although the article “List of paintings by Pieter Bruegel the Elder” lists, by my count, 50 works.

2Landscape With The Fall of Icarus is an interesting case. The rows being tilled by the foreground plowman plainly inscribe the same sort centripetal movement, but at the center is a depression, the ocean. Still, we know the painting’s title, accept the Where’s Waldo-like challenge, and (eventually) see Icarus’s flailing legs. Like the shepherd in the middle-ground, we imagine his descent. The invisible trajectory of his fall becomes the circus-tent-pole support of this composition.

3Unlike Wallace Stevens’s “Anecdote of The Jar.” The jar, placed on a Tennessee hillside, “took dominion everywhere”: “It made that slovenly wilderness / Surround that hill. / The wilderness rose up to it, / And sprawled around, / no longer wild.”

4Bruegel, too, seems interested in the relationship of architecture and nature: the windmill in Procession to Calvary sits on a cantilevered platform on the top of an imposing natural monolith; the tiered archways of his Tower of Babel, reminiscent of the Colosseum, are weirdly broken by rocky outcroppings, as if the structure were, improbably, the elaboration of an existing mountain— or, as if it were visibly “rising into ruin.”