Ken Okiishi recently showed some ten or so works from his Gesture / data series at Reena Spaulings. The idea’s quite simple, really. It’s a wonder no one’s done this before. Actually, I didn’t check— because it’s difficult to imagine that anyone’s done it quite so well, the question seems irrelevant. The works are all oil paintings executed on upended (vertical) flat-screen televisions. In most cases, the Samsungs project looped, pre-recorded bits of broadcast; a few show dynamic, digital color-fields. Over these backdrops, Okiishi has made paintings, gestural compositions that, per the press release, “may recall Joan Mitchell or even late Monet.” 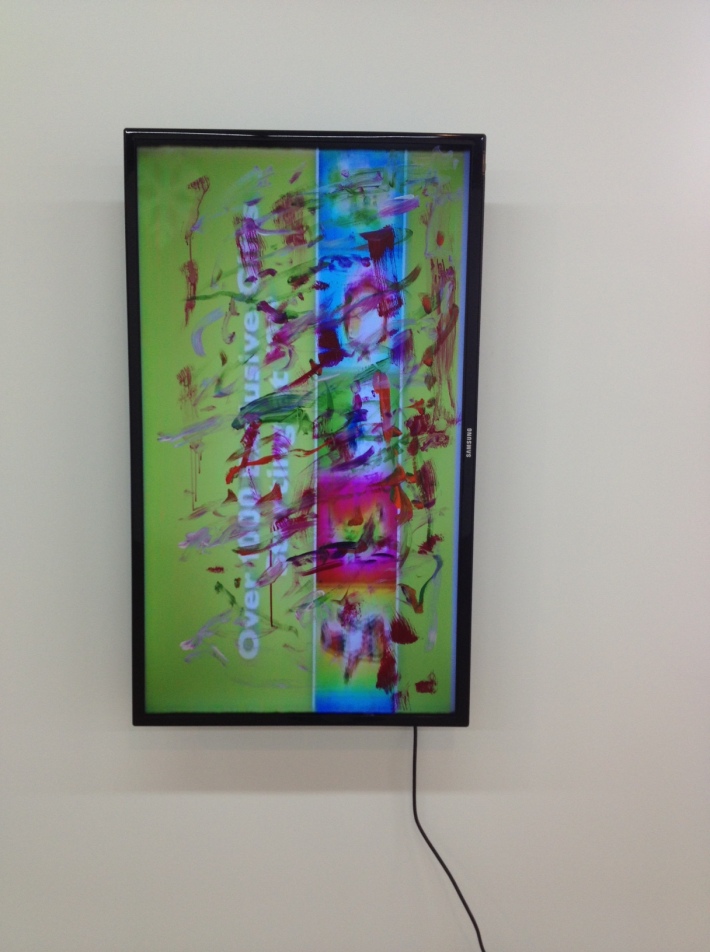 The timing of this show, Okiishi’s first with the Lower East Side gallery, is relevant: four Gesture / data works are also included in the concurrent Whitney Biennial (on the museum’s third floor, curated by Stuart Comer, for those keeping track.) (Four works, five screens: one of the pieces at the Whitney is a diptych, an arrangement also explored at Reena Spaulings.) His artist page on the Biennial website elaborates a sort of primal scene: “Taking a picture of [a large painting by Joan Mitchell] with his cell phone, [Okiishi] was intrigued by the immediate impact that making the photograph had on the painting as it lost its scale and materiality to a small, portable field of glowing pixels and code.”

The painting is indeed rooted in landscape-derived abstraction. But, of course, there’s more happening in these hybrid works. The hand, free and varied, ranging from fencerly slashes to ponderous dabs, is avowedly inspired as much by the swipes and taps of contemporary touch-screen technology as by the mark-making of mid-twentieth-century.1 The side-to-side strokes, in other words, might recall a field of swaying grass– or they might relate to the hand-motion used to switch between iPhone tiles. Reference aside, the results are interesting and satisfying: there are thick passages and thin; solvent melts holes through the paint here and there. (Oil over electronics is icky fun.) Emitted light mixes with reflected: the paint covers the television feed; the changing feed, in turn, obscures or emphasizes certain painted colors. Red, for example, disappears against a fuschia background while the green pops— and both even out a moment later as the screen cycles to a pale pearlescence. The stylistic touchstones might be modernist, but the assumption of an essential (synchronic) balance is out the window. A few of the televisions are silent; most have audio. Constant, inane chatter fills the gallery space. A commercial tagline, for example, chimes: “Frosted Mini-Wheats: Keeps ’em full, keeps ’em focused.”

Part video, part painting, the contrast between elements couldn’t be more direct. Still, the works manage to slip facile oppositions. The real accomplishment of Gesture / data is their enforcement of self-awareness. Standing in front of the one of the screens, I found myself experiencing the difference between looking and viewing with wonderful immediacy. (Incidentally, I’m never too fastidious about the first-person, but here it’s near inevitable: the easiest stand-in for oneself, i.e., the one standing in front of the art, i.e., “the viewer,” becomes, in its incompleteness, a blatant misnomer.) There are different strategies for negotiating these two ways of seeing: you can unfix your eyes to take it all in, hazily, at once; or you can skip schizophrenically back and forth, watching, say, the sideways hair stylist making over a client next to the scrolling TV Guide listings— then looking at the pale yellow-green and blue spots of paint, plainly floral, that flicker across the surface of the screen.

Among Okiishi’s earlier output, which has often included video, these works stand out as distinctly object-y. Paint has that effect, apparently: instant reification. Still, it would be tough to say these works mark a distinct turning point: there are through-lines. Technology, for example, has been a concern. More significantly, Gesture / data conveys the sorts of feelings of loss that Okiishi has previously explored.  These works are, after all, technological condensations that encapsulate their own obsolescence: as the checklist specifies, the recorded footage has been variously transferred from VHS or HDV to .mp4. Pairing the fickleness of recording formats with an explicitly dated (if still seductive) style of paint handling, the works can start to seem like little elegies.

Snark and smarm are the Scylla and Charybdis of art founded in digital culture; Okkishi steers clear. Indeed, I detect more than a mite of humanism at work in Ken Okiishi’s oeuvre. Experience and psychology figure, quite a bit. Technology, for him, seems to be culture in the anthropological sense. His response, though, has often been rooted in personal experience. Here, in the absence of any strong or obvious personal content, the work is sufficiently nuanced and invested to allow for one’s own connections to be made.

P.S., Some nifty photos at Contemporary Art Daily show multiple images, taken at different times, of some of these works.

1An additional resemblance: the calligraphic (albeit mechanically printed) Chinese characters that dot the neighborhood signs and windows– including those of the gallery itself.